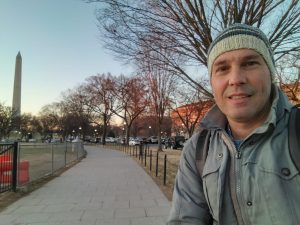 This was my first year at the Annual Meeting of the Transportation Research Board (TRB), the world’s largest transportation conference that brings over 12,000 transportation experts from industry, government and academia to Washington DC in January each year.  In this post, I would like to summarize the research I shared at the conference, and distil some lessons about what I learned. 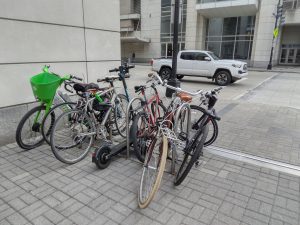 We document that demand for on-street bicycle parking exceeds supply in a few select locations, and since this imbalance is persistent at the same locations, it creates the perception of a generalizable undersupply of bike parking, even if parking is largely available in most other parts of the city. We see that the dock-less shared bicycles concentrate in sites visited by tourists.

People seemed to really like our methodology of using different color stickers over the course of a day to measure rotation. Simple, understandable, and effective. But it also takes a lot of person-hours to be out in the field. Looking ahead, we look forward to using the BiciZen citizen science platform that will to allow any bicycle user in the world to report bicycle parking occupancy and bicycle type in their city. The BiciZen app will be available on the Google Play and Apple Store later this month. 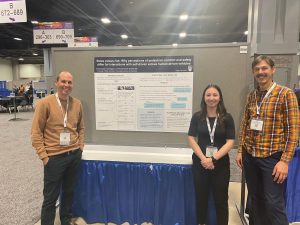 The paper titled Rules versus risk: Why perceptions of pedestrian comfort and safety differ for interactions with self-driven versus human-driven vehicles was forward to review in Transportation Research Record – an impressive feat since only 10% of the papers submitted are forwarded for review. Congratulations Emily and team.

I aimed to attend all the sessions that talked about bikes. There was so much going on, I could not see it all. Here are a few reflections from my very first TRB Meeting.

It would have been difficult to make new connections and friends had it not been for some colleagues that made some introductions, so I am particularly grateful to Alex Bigazzi and Kelly Clifton from the University of British Columbia.

I hope that next year I can be back to present work on BiciZen and BiciBus! 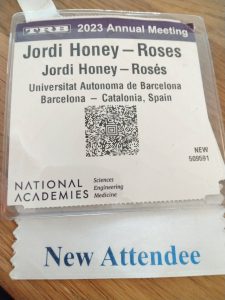