Over 2,000 children and parents rode bikes through the streets of Barcelona this weekend, as part of the city’s first Kidical Mass demonstration, demanding #StreetsForKids, improved cycling infrastructure, cleaner air and bikeable cities for all ages and abilities.

The origins of the Kidical Mass can be found in Eugene, Oregon, as an evolution of the original Critical Mass bike rides in San Francisco from the early 1990s, but meant for kids. I had the chance to meet one of the Kidical Mass founders, Shane Rhodes, at the Bike Parking Workshop organized by City Lab Barcelona last month.

This was Barcelona’s first Kidical, and the event brought together families from the #bicibus (bike trains) community across Catalonia. The bike ride and demonstration served as an end of year celebration for Catalonia’s #bicibus movement, which has exploded since last Fall.

After participating in such an inspiring event with kids on bikes, there is a lot to share: how children deserve to be the center of city planning; the specific demands of the organizers for a more bikeable city; or how fun the event was, with music, a live band, balloons, faux tattoos, colorfully decorated bikes and theatre.

But what I will remember from this year’s Kidical will be the extraordinary capacity of the organizing team to orchestrate such a huge event. While the kids are the focus of the Kidical, it is worth reflecting on the work behind the scenes led by volunteers that pulled off this successful demonstration. This capacity to self-organize says something special about the cycling movement, but also the social fabric of this city.

Aside from some outreach, I did nothing to help organize the Kidical. But I did have a window into back-end, and could see what it took to pull this off. And from my perch, what I saw was remarkable. The organizing team displayed an extraordinary capacity to collaborate, organize, and mobilize. The event was organized by a coalition of volunteer associations that operate mostly without paid staff: Bicibus Eixample, Canvis en Cadena, Eixample Respira, Bike Vidrera, Bicicleta Club de Catalunya (BACC), Biciclot, Camí Amic, Maragall Respira, ….. But behind those associations are specific individuals who have devoted hundreds of hours and late night meetings to make the event run smoothly and capture headlines.

Seed funding came from the Bicimpuls prize granted to Bicibus Eixample for their work in launching the Bicibus in Barcelona in the fall of 2021. The group decided to re-invest the funds into the Kidical event. It is astonishing what the cycling community can do with 3000 euros and 40 committed volunteers. And the important part of that equation is really the second part: the social capital, the trust, enthusiasm, energy, creativity and commitment of the organizing team.

Planning academics like to theorize about bottom-up planning processes, community led initiatives, community engagement and planning from below. In this case, it seems like the community led process will be driving the policy conversation as well as the research agenda. I know of three doctoral students who paln to write their dissertations on the Bicibús movement, including Gemma Simon i Mas, a member of the City Lab Barcelona team.

The Kidical was clearly a post-pandemic demonstration. Organized mostly on weekly online meetings and over Telegram, the organizers leveraged the willingness of parents to meet at 9:30 pm on evenings after the kids had been put to bed.

Even more impressive: the Kidical was organized on top of everything else activists are organizing in the city. To appreciate how unrelenting activists for #saferstreets are in Barcelona, let’s just look at the calendar from the last two weeks.  On Friday May 6th we had #RevoltaEscolar, #CleanCities Campaign & #Bicibus. On May 15th the #Kidical. And tomorrow, May 17, Eixample Respira is launching a new campaign, #Barcelona22.  The pace is frenetic.

Surly the Kidical is all about putting kids first. But after witnessing such an extraordinary event pulled off by the volunteers, I feel obliged to congratulate the extraordinary team of organizers that brought together thousands of cyclists in a fun event that brought us a little closer to more livable cities.

To see images of the event, check out the social media feed of @bicibuseixample @eixrespira or follow #KidicalCat #KidicalMass 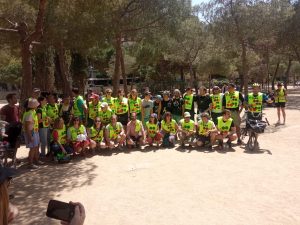 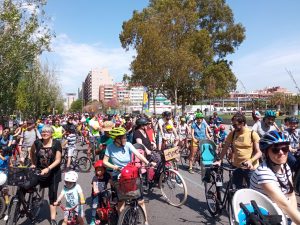 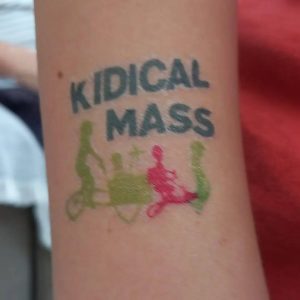 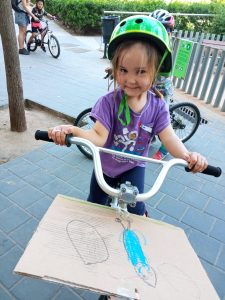