This week parents and bike activists in Barcelona added two new #BiciBus (also known as BikeBus or BikeTrain) routes in the city: one in Sarrià and another in the Old City. Only days earlier, parents in the neighbourhood of Les Corts had inaugurated their own #BiciBus route, brining the total number of routes in Barcelona to seven. With the addition of three more this month, the growth of the movement remains frenetic. When I spoke to key bike activists, Helena Villardel, Eduard Folch and Yago Raventós in July of 2021, the prospect of adding new #BiciBus routes in Barcelona seemed like a Herculean task. ‘The city is less bikeable’, ‘streets have too much traffic’, ‘parents will be hesitant’…  Now, 8 months later, #BiciBus has taken off at a pace that has surpassed even the most optimistic expectations.  What explains this amazing success? Why has the movement taken off? And perhaps more importantly, where is #BiciBus going? Will it continue to grow in size, frequency and routes? In this blog post I would like to reflect on these two basic questions: how did we get here? and where is #BiciBus going?

This first question is how did we get here? What explains the raging success of #BiciBus in Barcelona? How have parents been able to succeed with #BiciBus in such a large city? Recall that the first #BiciBus routes in this part of the world were developed in a mid-sized town of Vic. When I lived in Vancouver, I would also see a group of kids with one parent (or none) riding their bikes to University Hill Elementary School in a route that cut through the forest of Pacific Spirit Park. The routes in Vic and Vancouver were mostly on streets with little traffic. They were relatively small and manageable. Yet many streets in Barcelona are not bikeable for kids, especially during rush hour traffic. How did #BiciBus succeed in a city where it is so difficult and dangerous to cycle with children?

Counter-intuitively, it is precisely the lack of bikeability for kids in Barcelona that partially explains its success. Participation is a both political statement and a fun activity with the family. Precisely because it is so difficult to ride your bike with your kids in a safe environment in Barcelona, that parents now seize the opportunity to ride to school with their children on Friday mornings.

Another explanation for the rise of #BiciBus is that it has aligned perfectly with two pre-existing movements: the movement to improve air quality in Barcelona, led by Eixample Respira, and the movement to improve the environmental and safety conditions around schools: #RevoltaEscolar. #BiciBus has been a fun way to push the same agenda. The overlap and synergies across these three movements has been critical, and anyone who gets involved will quickly recognize the same names and faces.

The second big question is: where is #BiciBus going? How far will parents and bike activists go? How many more routes can be created? Can the frequency be increased with the same level of participation? How will the city respond? Will the city police continue to provide route support if the 7 routes decide to take the streets daily instead of once a week? And ultimately, will #BiciBus achieve real changes in city planning and design? These are the questions that #BiciBus activists are asking themselves, often in conversation at the post-bicibus/post-kid drop-off coffee and chat.

Yesterday I was invited by Yago Raventós to join the #BiciBus Sarrià, now re-born as the Via Augusta route. While I have participated in BiciBus Eixample several times, I was again blown away by the powerful experience of cycling with kids on arterial roads clearly not designed for children (Via Augusta).  Yago had told me months ago to reserve March 4th on my calendar, because he was planning on bringing back BiciBus in Sarrià under a new and improved format. Yago is known in Barcelona for creating the first Bicibus in this big city. The Sarrià neighbourhood was a logical place for Bicibus to gain its first foothold in Barcelona because the neighbourhood has narrow and walkable streets.

I met Yago in July 2021, as we prepared an action-research project on BiciBus in Barcelona. Our research project was not funded but the experience of writing the proposal allowed us to work with the team at Canvis en Cadena, Biciclot, and IS Global.

The Sarrià or Via Augusta route is different than the Eixample routes. It travels uphill, begins on a major arterial road, and connects many more schools, leading to a dynamic entry and exit of parents and children. The music is a blast. Yesterday, the #BiciBus with Yago felt special. You really got the sense that it was just the beginning.

Here in Barcelona, there is this feeling that these Bike Buses are really going somewhere. “It is such an honor to be a part of this. Thank you to all the organizers!”, the message came through the Telegram group last night, and it captures the sentiment perfectly. You can feel the momentum. It is fun and energizing. It is healthy and social. There is an element of subversion – occupying road space with kids and bikes. It makes a political statement. Try peddling down a 3-4 lane arterial road, following a kid with with training wheels, and it becomes obvious that our cities are not designed at the human scale (much less a scale for children). The experience forces us to re-think our city. It puts a mirror up to ourselves and shows us who the city is designed for, and who is left out. It forces us to ask why we cannot design our streets for children, who simply need to get to school. Such a basic and everyday function in life, and yet putting them at the center of our streets, literally, suddenly seems exceptional. And it is this exceptionality, of something that should be central, makes it all the more powerful.

It is difficult to predict what lies ahead for #BiciBus. The movement can be tremendously proud of what it has accomplished in such a short period of time. Activists, city officials and researchers are all asking similar questions: what is the impact of this effort? what are the long term impacts of these cycling experience for kids? How might their mobility patterns change in the future? Advocates of the #BiciBus initiatives are eager to document the impact of their work. Gemma Simon and Sara Martin, both members of City Lab Barcelona at ICTA-UAB will be working on a few of these questions. Yago himself is planning on writing a PhD dissertation on the BiciBus experience, and he is nicely positioned to write an excellent action research dissertation.

We will have to devote another blog post to the question, what makes #BiciBus different in Barcelona than in other cities? We will get to that. Meanwhile, if you haven’t joined a BiciBus yet, try it. It will be an experience you will not forget. 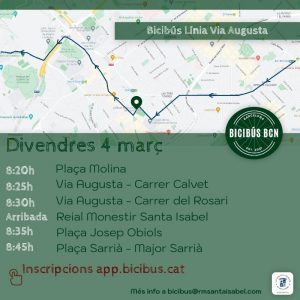