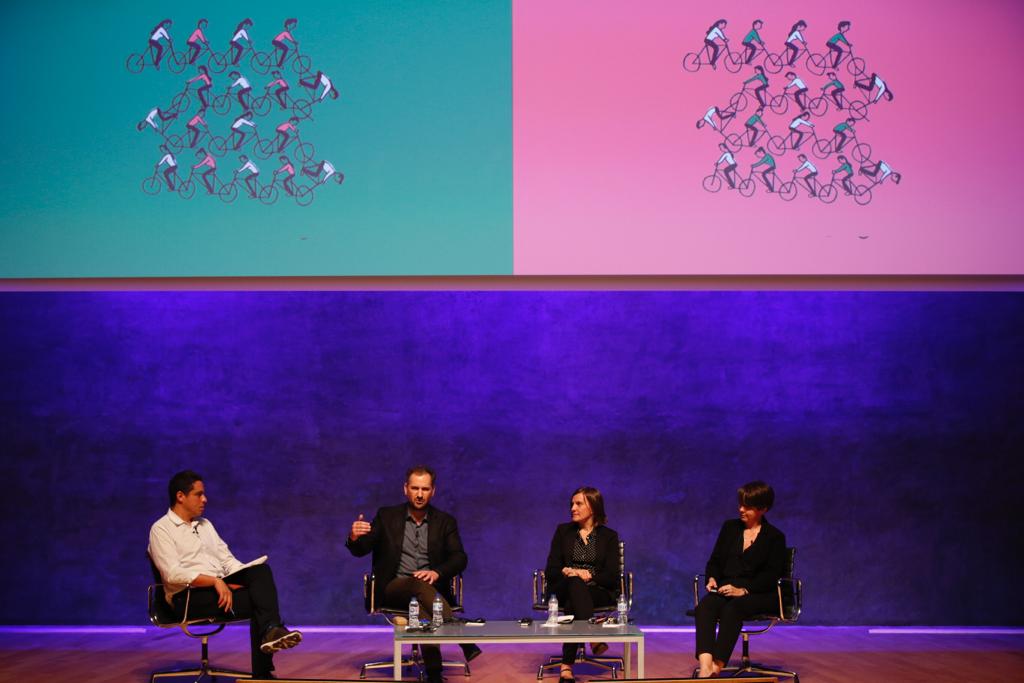 The CICLOBCN21 Conference brought together cycling organizations, activists, city policy makers, transportation wonks, academics, and cycling entrepreneurs on 7-9 October 2021 in Barcelona. As one of the largest cycling conferences in the Iberian Peninsula, it attracts cycling experts from Spain and Portugal.

It felt wonderful to participate in an in-person conference again, to chat face-to-face and meet new people. For me it served as an introduction to the cycling community in Barcelona (and beyond), on a topic where I expect to be conducting research in the years ahead.

Here are my personal take-aways from the CICLOBCN21 conference:

*Cycling policy is activist driven. That is, a small group of committed and knowledgeable individuals have been pushing for change, and in most instances, the policy transformations are in response to organized pressure. My sense is that success is the result of close collaboration between the cycling experts and the administration.

The government agencies were on the conference schedule, but they felt absent: not driving the agenda, not sharing new material, nor pushing any boundaries. The City of Barcelona seemed particularly absent. Sure, Janet Saenz inaugurated the event, but where was her transit team? The designers of the bike lanes? Why were they not sharing their work on design standards, or cycling counts? Or other cycling data from the city? New plans or ambitions? Given the size and work done by the city, it felt as if city officials had largely skipped the event, leaving a large hole in the conversation. Was this a reflection of where cycling fits in the ranking of political priorities? Why isn’t city leadership driving a new vision for a more cycling in the city? Instead, the agenda is being driven by the few activists that enter government positions, or the few committed elected officials that then work closely with activists, as in the case of the town of Cardedeu.

*Cities such as Amsterdam, Paris and Copenhagen are our inspiration. Nothing new here, but session after session reminds us of just how differently other cities approach the integration of the bike. We heard about the experience of mid-size cities such as Seville, Valencia, Elche, and even towns like Cardedeu that succeed in creating high quality cycling infrastructure. And the international examples showed us how cycling can be integrated seamlessly into the city and transit stations.

*To achieve serious CO2 emission reductions, we need a stronger regional cycling network. In this regard, the AMB presented its ongoing work to roll out the regional cycling plan, CicloVia. Their work is on target, bottom-up and conciliatory between municipalities that need to coordinate route choice and design. However it does feel that it is moving too slowly. Furthermore, the overall map is missing the cycling connection Barcelona-Sant Cugat-Vallès, which is a pending issue that will need to be addressed within the next few years.

*Bicibus is a huge inspiration, creating cycling communities for kids. Seeing kids cycle to school in a group is tremendously inspiring. In Catalonia, the #bicibus initiative has exploded in mid-size towns and smaller villages, pulling kids and parents out of their cars and onto their bikes. As a sort of “critical mass for kids” one can imagine that this experience might have long term impacts on children and their mobility choices. The program is so much more about simply riding a bike to school, it is also about empowering children, connecting them with their city, creating community with their peers, generating autonomy and a sense of belonging. These tangible and intangible and intangible benefits contribute to children health and wellbeing, and really make the bicibus programs inspiring and admirable. The cycling advocates that began the bicibus experience in the mid-side town of Vic, Canvis en Cadena, run by Helena Vilardell and Eduard Folch, were recognized with the cycling award for their work. It will be exciting to see where they go from here, and I hope that we can work together in the near future.

*More attention needed to address the gender gap. Sara Ortiz from Col.lectiu Punt 6 gave an inspiring presentation on the feminist city, which emphasized diversion and inclusion beyond gender or gender identity. These issues were being raised a bit late in the conference, which illustrates the biases that may be part of the transportation community, and also illustrates how activists and organizations appear to be driving the agenda on critical issues.

*Is it time to develop a bike parking strategy? There was conversation about bike parking at transit stations but there seems to be a pending conversation about all aspects of bike parking, particularly at work destinations and in homes. Soon our research team will be sharing some early work on on-street bike parking in Barcelona, with the interesting neighbourhood patterns we have observed in which some locations are consistently at capacity, signaling localized bike parking needs. And yet this is the tip of the iceberg, because there seems to be the need for a more comprehensive assessment and development of a city-wide strategy to accommodate for quality bike parking facilities at home, at work and throughout the city.

*There are still critical data needs. All the presentations at the conference were of very high quality but only a few of them presented new data. We heard conflicting answers to the question: has the pandemic increased cycling levels in the City of Barcelona? Many data sources suggest that the answer is yes (intercept surveys, opinion surveys, bike sales, bike share subscription), data from the largest travel survey says the answer is no (AMB+IERMB Enquesta de la Mobilitat en Dia Feiner, presented by Samuel Nel.lo). So what is really happening here? The community appears to blindly rely on the EMDF travel survey, but how do these results fit with other data sources? What might be the blind spots? There seems to be room for deeper analysis and collective learning through the combination of our various data sources, including large scale surveys, smaller surveys and observation data collected through sensors or other means.

These are a few of my take-home points. Certainly incomplete and they do not do justice to the brilliant conference. I am grateful to all the organizers of the conference, most of whom helped pull this conference together as volunteers. You could really sense the volunteerism and activism behind the action. Congratulations to the organizers and I look forward to joining you again in the future. 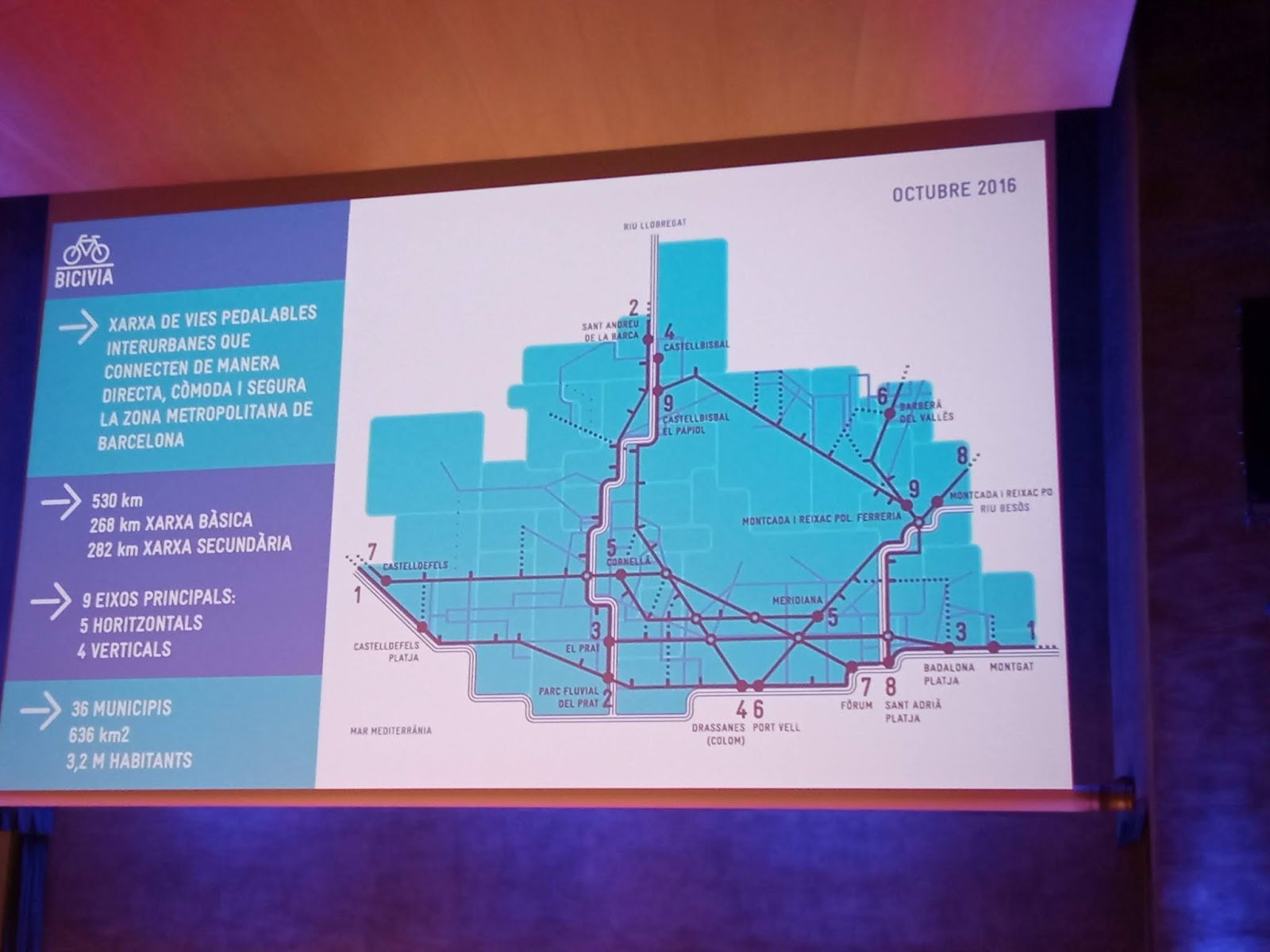 The Metropolitan Agency of Barcelona has identified 9 metropolitan cycle paths which, once fully developed, will provide a regional cycling network. The network has been developed through a bottom-up and consensus based approach, but it remains incomplete, and it is missing the critical connection between the city of Barcelona and Sant Cugat del Valles. 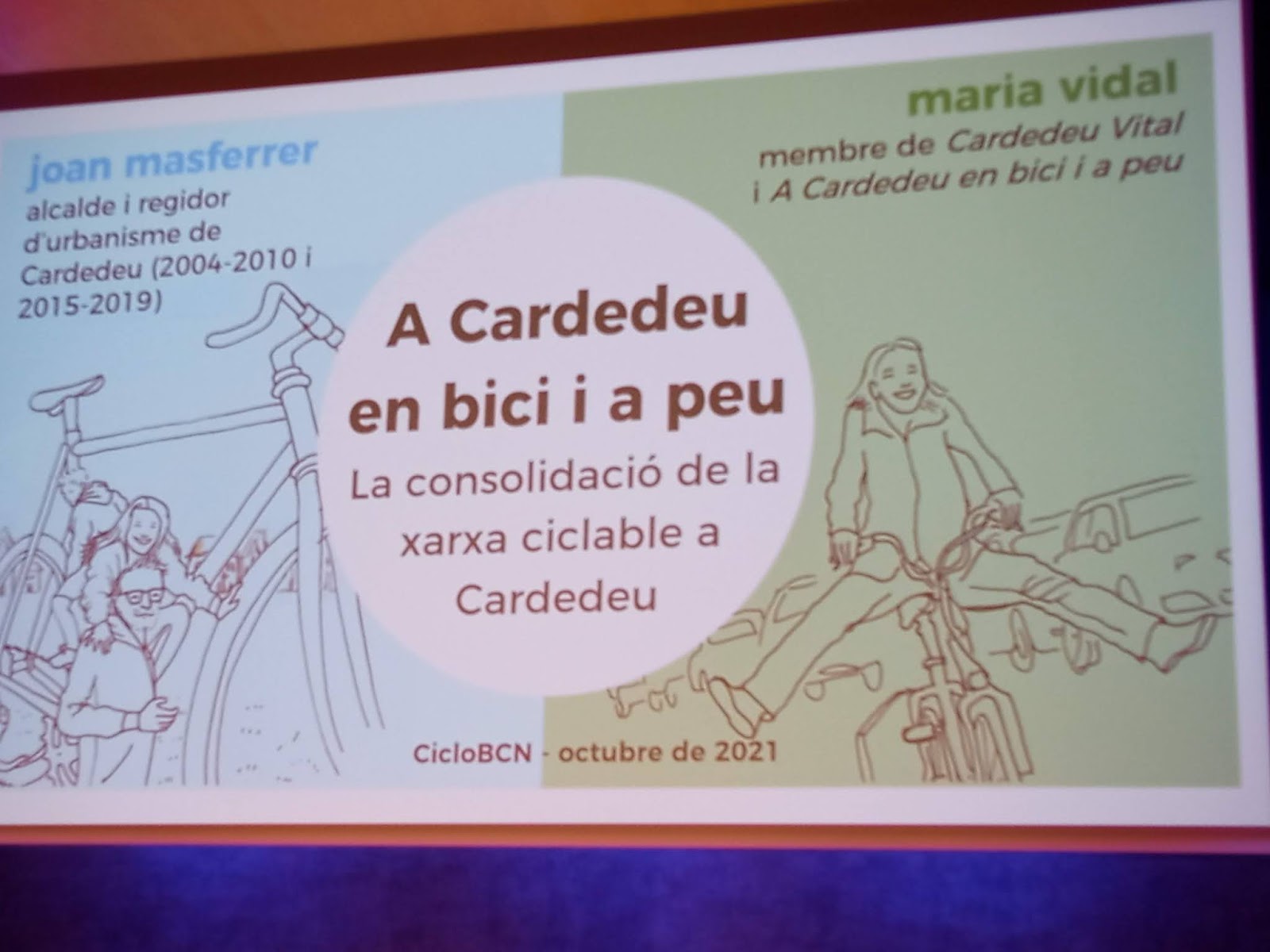 The former Mayor of Cardedeu, Joan Masferrer, described the inspirational work to develop cycling networks in his city, in close collaboration with community members and activists, such as Maria Vidal.

Bicycle theft is often dismissed as a minor crime, an inconvenience, or an accepted risk…