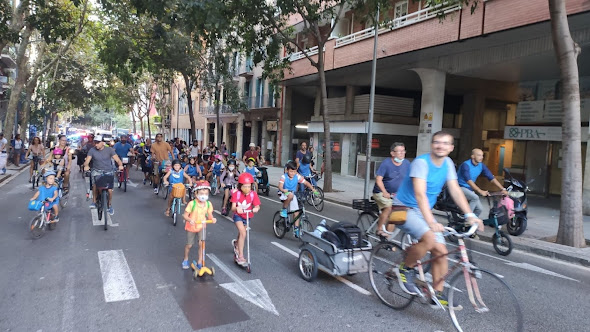 The image of kids riding their bike to school in a big city is highly inspiring. Kids on bikes. Together in a group, going to school. Pedalling together along city streets, each on their own, yet together in unison.  Yesterday we saw images of the first Bicibus in the Eixample grid of Barcelona (see here or here).  You can think of BiciBus as a sort of critical mass for kids going to school. This was not the first Bicibus in Barcelona, that honor goes to the group in Sarrià, and yet the first group in the Eixample somehow feels like a turning point. If we can insert kids on bikes here, we can do it anywhere.

@BicibusEixmaple is an experiment that we should all be watching closely. Until recently, most #BiciBus projects have been in smaller towns, with bikable streets and distances that are amenable to cycling school commutes for kids and parents. In the suburbs, one can imagine asking kids to bike to school together in a group to increase safety and convenience of the parents who need to drive in another direction.

But can the BiciBus model be successfully adopted in a city? On streets with so many vehicles? What are the special considerations and needs of a BiciBus project in a highly dense and urban environment? Is the temporary conquest of city streets by kids riding their bike to school a merely symbolic and temporary victory? Might it be only an inspiring image to share on social media? Or is it more than that? Can the BiciBus experience transform the way children see the city, see themselves and the transportation choices in the future? What are the long lasting impacts of a Bicibus experience? If 10-11 year olds participate in the Bicibus today, later in life might they be more likely to own a bike? Might they be more likely to become an urban cyclist? What are the short term and long term impacts of participating in a collective urban cycling experience with other children? Can projects like Bicibus accelerate our transition to sustainable and healthier cities? We should all be working to watch and find out.