What are the elements of a research laboratory that studies urban questions? How might one systematize the study of cities? What does an urban model look like? To what extent can research on cities resemble methods in the natural and physical sciences? To what extend should it differ? And is it worthwhile pursuing a general theory of cities, planning or urban science?  These are the questions that preoccupied the urban theorist, architect and intellectual, Manuel de Solà-Morales (1939-2012).

I first came to read Manuel de Solà-Morales (MdSM) when I picked up his book The Ten Lessons on Barcelona – and it blew my mind. The book is based on his class lectures to architecture students, and it distills 10 fundamental lessons that Barcelona can teach us. It is a beautifully written account on the history and transformation of the city.

Now I have the chance to understand his full body of work in a collection of essays carefully selected to represent his intellectual evolution and contribution to urban planning. Mirades sobre la ciudad is a new book with writings by MdSM compiled by Oriol Clos a former student, colleague, personal friend and professional architect. The book had a launch event this week (7 June 2021) at the CCCB.

The event was filled with the who’s-who of city planning and architecture in Barcelona, including Joan Busquets, Horacio Capel and many others who I did not recognize behind the masks or simply do not know. Since I did never met MdSM, I felt a bit like an outside. The event felt like a gathering of old friends, and the average age of the audience made me feel young. And yet at the same time, as an eager student of planning with particular interest in Barcelona, I also felt perhaps that I was part of the target audience that Oriol Clos had in mind when he put together the book.

I have not yet finished the book, but the event was inspiring enough to see the connections between his work and mine. The first and most obvious connection is the notion of the urban laboratory. Indeed, MdSM was the the director and founder of the Urban Laboratory of Barcelona (Laboratori d’Urbanisme de Barcelona) – a group of researchers and students, among which many went on to lead the transformations of Barcelona in the 1980s and 1990s that later defined the “Barcelona Model” of planning.

It was interesting to hear Oriol Clos describe how the title of the book, Mirades sobre la ciudad, was chosen because Professor Solà-Morales taught students to observe the city in a particular way. He noted that these skills in observation were perhaps one of his key teachings for his studnets. Clos also argued that observation is a skill that needs to be practiced and exercised. I would agree and add that observational methods remain underused in planning education and practice.

I am a huge fan of observing the city, in situ, on the street, to collect new information and insights about how a city works, about how people interact, respond and engage with multiple urban stimulus as well as with each other.  Together with students from the University of British Columbia, and colleagues at IS Global, we have adopting systematic observation to gain insights into city dynamics in the Poblenou neighbourhood of Barcelona. We have drawn from the work of Jan Gehl (How to Study Public Life) to systematize our observations. The results of our observational work has been compiled in two reports, that compared patterns in movement and staying activity in four sites in Poblenou, each titled Life in Poblenou  (2018 and 2019).

I am curious to learn how systematic observation was part of the Urbanism Labortory led by Professor Solà-Morales. How did he observe the city? What might his lens see that I would not see? It would be fascinating to learn more from his former students about the ways of looking, watching and observing – skills so essential in a laboratory. 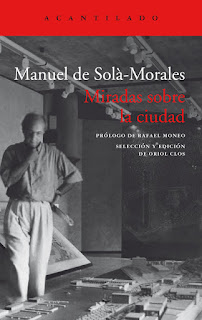 There are two final ideas that stuck with me from the event. First, Oriol Clos was asked about what MdSM might have thought about “tactical urbanism” and recent efforts by the city to re-design the Eixample or other neighbourhoods through tactical (temporary) interventions. Clos responded “I see you have ignored my request to ask me about this issue and so I came prepared with a quote from MdSM that might provide some insight into how he may have responded.” The quote went on to describe the critical importance of maintaining a consistent urban structure throughout the grid – suggesting that any alterations in the grid would debilitate the structure and create weaknesses throughout.
Therefore in a very diplomatic response, Oriol Clos essentially questioned the strategic purpose of tactical interventions – at least for the Eixample grid. Having emerged from a Laboratory on Urbanisme, I found this a bit surprising, if not contradictory. Tactical interventions align well with experimental forms of thinking and practice. In the quote from MdSM, he laid out a hypothesis about how a small tactical intervention might reverberate to impact the larger grid. Why not test this hypothesis? Wouldn’t that help us develop an improved model of how cities work? I would think that MdSM would be open – indeed enthusiastic – about such ideas.

The second piece that struck me from the conversation, was the claim made by Oriol Clos that L’Illa Diagonal was the greatest urban project in Barcelona since Spain transitioned to a democracy. As a private shopping mall with office buildings on top, I was struck to hear such a bold claim. I sense there is something that I am missing. Certainly there must be good reason to make such a case, suggesting I have more to learn about this city.