The city of Barcelona has made an important step in their journey to become a greener city. The Mayor Ada Colau and her team announced the winners of the Superilla Barcelona design competition for the street re-design of four streets in the Eixample grid: Consell de Cent, Compte Borrell, Rocafort and Girona – and the conversion of four vehicular intersection into green plazas. The protagonist of this transformation is Consell de Cent, a street 2.8 km in length aiming to be the pioneer green corridor, and the test be of ideas for a much wider transformation. With a budget of 37.8 million Euros, the immediate goal is to complete the green corridor on Consell de Cent and the four plazas by February 2023 – and yet the ambition is clearly wider.  As illustrated by the name of the project, Superilla Barcelona, this is not to be a one-off city greening project, rather they are talking about a new urban model for Barcelona’s Eixample district, and a full overhaul of what it feels like to be in the historic grid designer by Idelfons Cerdà, the city planner – trained as an engineer – who coined the term ‘urbanism’. The potential for this project to transform Barcelona over the next decade cannot be underestimated. And yet, it will not be easy. We are clearly in the first chapter of the Eixample re-boot for the next century. In this post I want to review a few of the issues and controversies that are likely to emerge from this ambitious plan for the city.

First, the team should be commended for prioritizing people and pedestrians, and putting them at the center of the new urban model and street design. The project calls for the “absolute protagonism of the pedestrian“, implying a highly walkable, legible, slower and healthier city streets. The greening of the streets in Barcelona is sorely needed, and few could disagree that the city of the future will need more shade, vegetation, re-naturalized water flows, and fewer vehicles.

In principle, the project advance many good principles in healthy, sustainable and resilient design. But there are some open and unanswered questions.

What I noticed immediately is the absence of the bicycle in the plans, proposals and press release. And when I say absence, I mean it. The word ‘bicycle’ does not appear anywhere in the entire presentation, press release or any of the document released. … where is the bicycle? Where are the bike lanes or cycle paths? They are no where to be seen.

So in one of the renderings you see people standing next to a few bikes …..and that is about it. It is hard for me to imagine a city of the future without more cycling. Walking is great, but walking simply will not be able to meet our mobility needs.

I fear that this omission of bicycles is not by coincidence. Rumor has it that high level officials in the coalition governing party PSC-Partit Socialista de Catalunya (establishment centre-left) are highly resistant to the bicycle. This resistance cannot last forever. Right now it is entirely absent. Perhaps it has been swept under the rug for the time-being to allow for a unified front between the Comuns and PSC, but eventually this needs to be addressed.

In short, a time will come when the city and architectural team will need to articulate how they envision bicycles fitting into the new street model.

It has been less than 24 hours since the Mayor and her team announced the plans and I have already heard someone call the project and exercise in “greenwashing”. Is this project a maneuver in greenwashing to deflect criticisms that the City remains in persistent incompliance with European air quality standards? Is this project a way to capture financial investment or brand the city as green? My answer right now would be no. In my view, labelling this project greenwashing would go a bit too far. City planners are talking about redesigning the entire Eixample district based on based on the Consell de Cent experiment.

Unlike previous Superilla projects in which the city used temporary structures and low cost interventions, this project clearly abandons tactical urbanism, and returns to conventional approaches. What does this mean for tactical urbanism? Is the city making a retreat in its embrace of #TacticalUrbanism? I can see why the grandeur and prestige of the Eixample neighbourhood made the city architects a bit fearful of low cost and tactical interventions. You sense that the planners feel like they are in dialogue with the history of the city, and Cerdà in particular, making tactical interventions a bit beneath them, and also vulnerable to heavy criticism. This part of the city deserves more than a few cones and paint. It will be interesting to see how the design can maintain flexible spaces so that tactical interventions can still remain a part of the Eixample’s future, even if the major overhaul is formal and permanent.

So overall, there are some unanswered questions in this ambitious project. Certainly a move in the right direction, but wonder if the reality will be able to live up to the rhetoric. I certainly hope so, and I am wishing the teams the very best to transform the city of the future.

For more info and image credits, go to the city website here. The press release (catalan) and the full presentation. 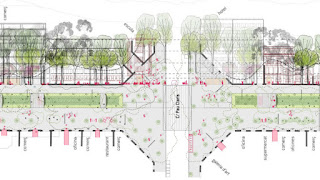 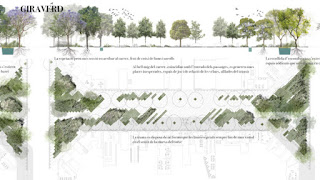 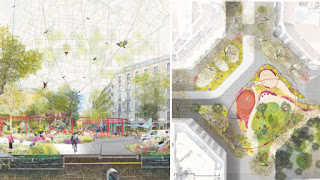 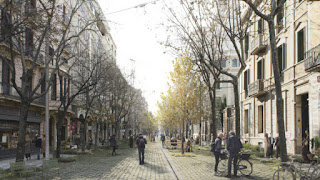